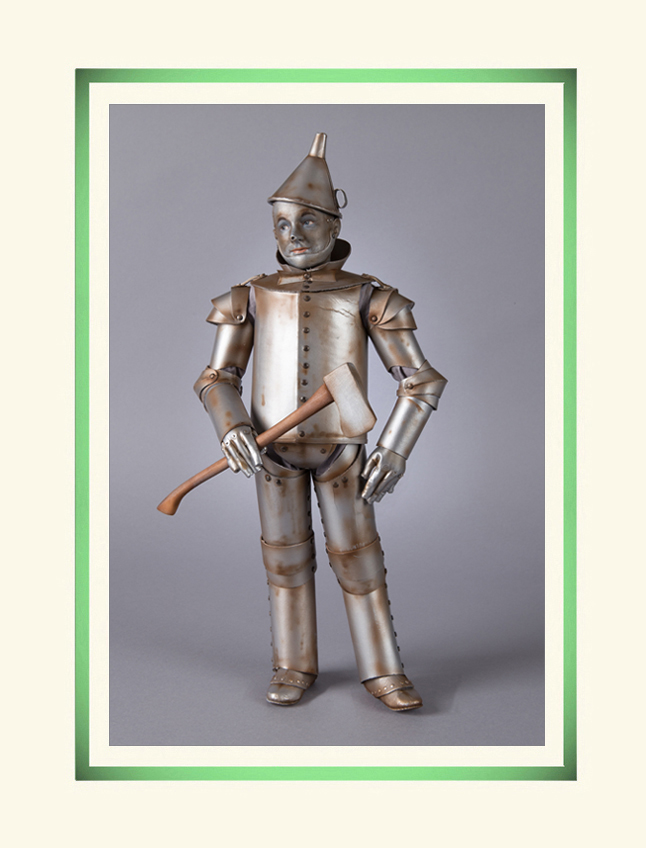 Faithfully based on the beloved character immortalized by Jack Haley in the 1939 film, the Tin Man has been brought to life by for the first time in the medium of molded felt.

The R. John Wright Tin Man is the most faithful recreation of this character ever produced. Standing 18 inches tall, he is an all-felt doll fully jointed at the neck, shoulders, elbows, hips and knees with the RJW ball & socket jointing system with an internal wood mechanism. Beneath his costume, the Tin Man has a realistic molded felt torso and limbs. Under his gloves, his amazing sculptural felt hands have individually sewn fingers! The character face has been finely sculpted in a true likeness and skillfully molded out of felt with hand painted features and a hand-applied metallic complexion.

Extensively researched for the utmost authenticity, the Tin Man's iconic costume has been precisely recreated in one-quarter scale. The suit is made just as the original was using several layers of buckram, a stiff fabric coated with glue. The buckram parts are bonded to silver paper and joined together with metal rivets to allow movement. The costume is accessorized with detailed gloves, a funnel hat (also crafted out of buckram), and a wooden replica of the original Tin Man's ax. No detail been spared to bring this beloved film character vividly to life as never before.

Produced in a limited edition of 250.

Sold out, thank you!